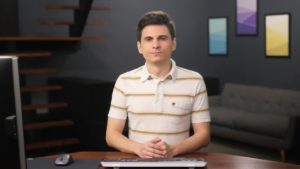 Every scene in Unity needs a camera in order to render graphics to the screen. In these lessons, you’ll learn how to create a game-ready camera, along with multiple cinematic cameras. You’ll learn about the basics of cameras in Unity, how to set up image effects to fine tune the look of your game, and how to program camera movements and camera switching.

Camera Basics
Adding a camera to a scene in Unity is easy, but there’s more to it than that. It’s critical to spend time fine tuning the camera angles, the camera movement, and the final rendered image, because that’s how your players will see the game.

Image Effects
In Unity, an image effect is a script that’s applied to a camera that modifies the rendered image. Image effects are similar to an Instagram filter or a Photoshop effect, in that they take an image and make adjustments. Image effects can dramatically change the look of any game.

Camera Movement
When a camera remains completely still, it can draw attention to the artificial nature of the scene. Adding some subtle movement helps to draw players into an experience.

Camera Switching
Switching between two cameras in Unity is simple. The difficult part is determining when the switch should occur. In these lessons, you’ll learn how to write a Camera Manager script to schedule and coordinate multiple cameras in a scene.

[O’REILLY] Getting Started with Blockchain and Cryptocurrency