[The Great Courses] The Science of Flight 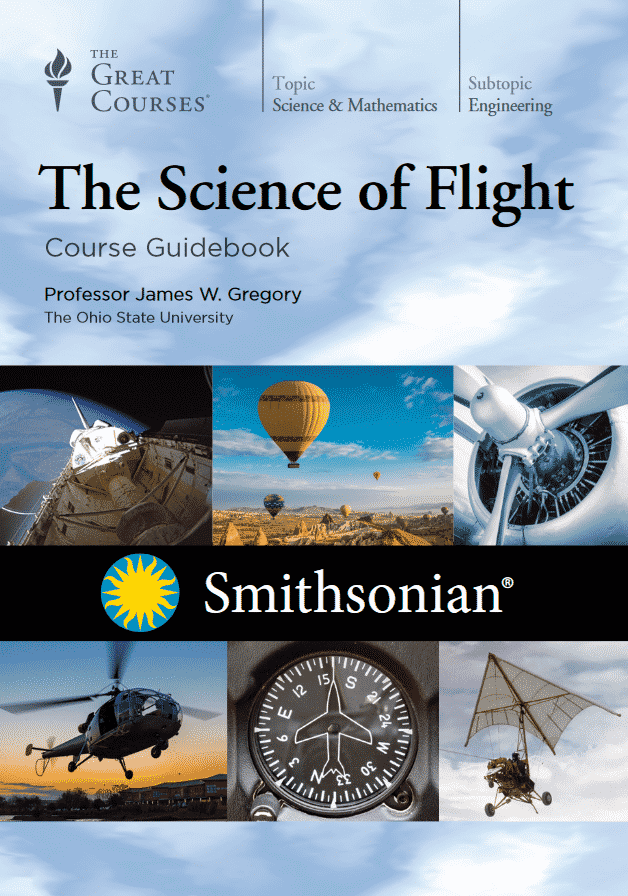 Many of us board a plane without understanding what a truly extraordinary experience flight is: suspended 30,000 feet or more in the air, propelled to our destination at close to the speed of sound, protected from extreme cold and low pressure by the thin skin of the aircraft. We realize it’s complicated, but few of us know how it works. Even more remarkable is space flight, the “rocket science” that we use as a benchmark of difficulty or complexity.

Yet the related principles of atmospheric flight and space flight are not difficult at all, and the study of these two miracles of modern engineering is a wide-ranging lesson in physics, technology, and history. No organization is more authoritative on this subject than the Smithsonian National Air and Space Museum (NASM) and its annex, the Udvar-Hazy Center. Together, they host the world’s premier collections of air and space artifacts and the home to some of the most distinguished scholars in the field.

The Great Courses is proud to join forces with the Smithsonian to explain flight as it’s never been explained before. In 24 visually rich half-hour lectures, The Science of Flight covers the inner workings of gliders, airplanes, helicopters, rockets, spacecraft, and other flying machines, illustrated by the incomparable holdings of NASM and with commentary by the museum’s internationally renowned curators.

The Science of Flight is taught by award-winning educator James W. Gregory, Professor of Mechanical and Aerospace Engineering at Ohio State University. An instrument-rated private pilot as well as an engineer, Professor Gregory gives as thorough an explanation of the principles of flight, rocketry, and related topics as you’ll get outside of flight school. Throughout, his beautifully clear lectures are supplemented by incisive commentary from NASM experts, who put everything from airfoils to orbits into a fascinating historical context.

One big advantage of taking the engineer’s approach to understanding flight is that it clears up common misconceptions. For example, a frequently heard explanation of lift is that air rushing past a wing has farther to go along the curved upper surface than along the flat underside. According to this view, the top flow of air must go faster to “catch up” with air directed along the bottom. Faster-moving air equals lower pressure, which equals lift. The last sentence is correct, but the rest of the explanation is wrong—as shown by the existence of symmetrical airfoils and planes that fly upside-down.

To get at the real origin of lift, Professor Gregory uses conservation of mass and momentum, a garden-hose analogy, and a standard illustration of smoke streamlines around an airfoil. In subsequent lectures, he employs the same ideas to explore drag. And when it comes to discussing the potentially fatal interplay of lift and drag known as stall, Dr. Gregory takes his private plane aloft and demonstrates an actual stall, explaining why it happens and showing how to recover from it.

But along with the cautionary tales, he and his NASM collaborators provide plenty of uplifting stories of pilots, astronauts, and engineers who mastered their craft and achieved wonders in air and space. Thanks to Professor Gregory and the Smithsonian, the drama, romance, and science of this incomparable endeavor truly take wing in The Science of Flight.

Additionally, you’ll receive five bonus interviews with NASM experts, providing further insights into the subjects explored throughout the course. You will hear Dr. John Anderson delve into Gustave Eiffel’s wind tunnels, the Wright Flyer, and the science of engineering faster flights. Dr. Tom Crouch explores the Wright Brothers’ and innovation, and Dr. Roger Launius dives into the inventive new ways we are working to fly higher, faster, and further.